Caffeine Undermines the Function of the Brain 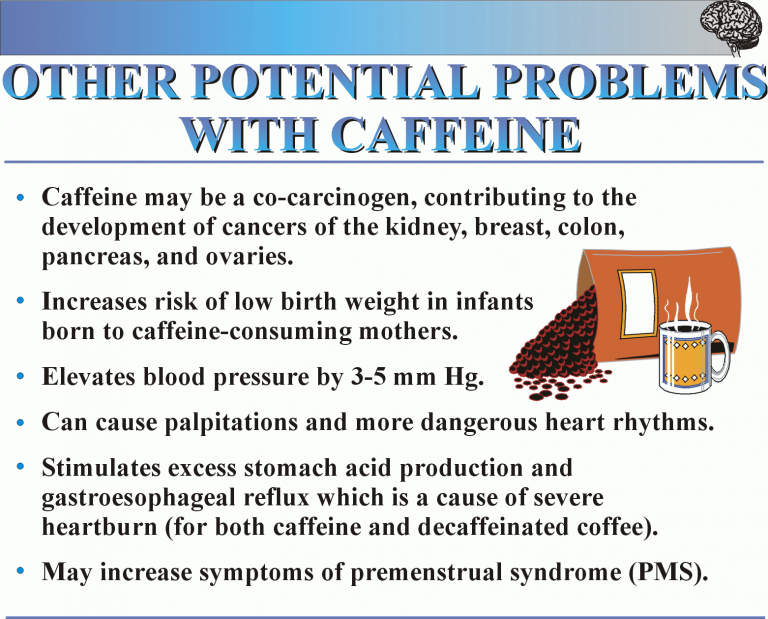 of the Frontal Lobe

Caffeine has far-reaching effects on the brain.  This is not unexpected, since it is America’s drug of choice for an early morning lift.  However, a heavy price is paid for that stimulation.  Let us look at how caffeine works and then explore some of its associated side effects.

Caffeine impinges on the brain’s communication system in a number of ways.  In exploring these relationships, we need to recall that brain cells talk to one another through chemical interchanges.  Nerve cells release chemicals called neurotransmitters (or “chemical messengers”) that are picked up by neighboring cells.  These neurotransmitters then cause changes to occur in the cell that receives them.  Some neurotransmitters cause stimulation of the recipient nerve cell, while others cause depression.  Caffeine’s widespread influence focuses primarily on its ability to affect the levels of two transmitters: acetylcholine and adenosine. Caffeine disrupts the brain chemistry by increasing the level of acetylcholine and interfering with the transmission of adenosine.  Thus, caffeine upsets the delicate balance of nerve transmission in the brain, which may have devastating consequences.  Adenosine tones down (or puts the brakes on) many aspects of brain nerve transmission.  But caffeine weakens its power to do its work, thus allowing artificial stimulation of the brain from the caffeine.

To a lay person, adenosine may seem like a “bad guy.”  After all, who wants to depress their brain transmission?  Perhaps we can see this issue more clearly by looking at an analogy: the importance of good brakes on an automobile.  You do not get into your automobile to stop—you get into it to go somewhere.  However, you would not feel comfortable driving a car that did not have the capacity to stop.  Good brakes are essential—especially on a vehicle designed to go.  Similarly, neurotransmitters like adenosine that have a large role in “putting the brakes on” are very important for balance in the brain. There are serious concerns in the psychiatric literature about caffeine’s role in “unbalancing” the mind.  Caffeine has been linked with anxiety, anxiety neurosis, psychosis (a state where a person loses touch with reality), and schizophrenia, the so-called “split personality” disorder.46  Other researchers add to this list caffeine-induced delirium and anorexia nervosa.47

A third neurotransmitter called dopamine also rises when you drink a caffeine beverage.48, 49

This is extremely worrisome.  Some of the most profound psychiatric diseases such as schizophrenia appear to be due in part to excess amounts of dopamine.  In fact, standard drug therapy for these serious mental disorders involves the use of dopamine-blocking agents.50  Consequently, it does not seem surprising that caffeine—an agent that raises dopamine levels—increases the risk of certain mental illnesses, even though it may appear harmless on the surface.

Other psychiatric diseases—with profound frontal lobe effects—may result from the unbalancing of brain communications by caffeine.  This is particularly true of depression. Decreased frontal lobe function and blood flow appear to be a characteristic of depression.51, 52 Research indicates that these changes may be partly related to dopamine levels in the frontal lobe.53  Recognizing that caffeine counteracts adenosine’s role in providing good blood flow to the brain and unbalances dopamine physiology, we would naturally wonder if there was a link between caffeine use and depression.

The internationally acclaimed Norwegian research project known as the Tromso heart study has provided at least a partial answer.  The Scandinavian researchers assessed 143,000 men and women and found a significant increase in depression in women who were heavy coffee users (but not in men who used similar amounts of coffee).  The findings are shown in Figure 15: Coffee Consumption and Mental Problems.54

In addition to the link with depression, women who used more coffee also had more problems coping with stress.  The reason why these effects did not show up in the men is not clear.  It may indicate that women are more susceptible to caffeine, or it may reflect caffeine’s exploitation of a greater female predisposition to depression.

If caffeine is so good for us, as some lay people (and even some scientists) would like us to believe, it is interesting to note that the brain puts forth great effort to try to undo the effects of this popular legal drug.  Under a situation of chronic exposure to caffeine, the brain tries to compensate in at least two ways.  First, it decreases its production of acetylcholine, as previously stated.55  This appears to be a way to lessen the impact of the increased acetylcholine levels brought on by caffeine.  Second, the brain increases its number of adenosine receptors.56  This is likely a response to give adenosine more of a voice in brain communication—in spite of caffeine blocking its role to some extent.  Unfortunately, these brain changes contribute to caffeine dependency.  Thus, brain structure and function have changed and consequently the brain actually comes to expect caffeine in its environment.  This is one of the reasons why coffee users are so committed to their morning brew.  If they do not get their caffeine, they feel that they are running at less than half-throttle.  Even more so, if coffee users stop using the beverage, they are likely to develop withdrawal symptoms such as headache in addition to fatigue.

Many have wondered why headaches occur during caffeine withdrawal.  The answer probably resides with either adenosine or acetylcholine or both of these transmitters.  One of the important functions of adenosine (that is blocked in part by caffeine) is relaxation or dilation of blood vessels—particularly those in the heart and brain.  During periods of habitual caffeine consumption, the brain increases the numbers of adenosine receptors in an attempt to give adenosine a more normal role in light of caffeine’s competition.  Once caffeine is removed, however, this increased number of receptors is still there for a short time.  The now unopposed action of adenosine causes marked blood vessel relaxation.  With relaxed blood vessels to the brain, there is an increase in blood flow, and thus brain congestion.  Many attribute the caffeine withdrawal headache to this mechanism.  Interestingly, the brain’s attempt to deal with caffeine-induced ACh changes, may also predispose to caffeine withdrawal headaches.

In practical terms, caffeine’s brain chemistry disruption sets the stage for more than just caffeine withdrawal problems and the frank psychiatric illnesses that we have already mentioned.  It may also weaken physical and mental performance in those who have no psychiatric symptoms and are not undergoing withdrawal.  Caffeine’s effects on worsening performance have been documented.  Although the drug tends to help people do simple tasks more quickly, there is evidence that it is “disruptive on more complex tasks of motor reaction time and fine motor coordination.”57  The decreased production of acetylcholine that results from regular caffeine use, may also play a role.58  Researchers consistently find that a decrease in brain acetylcholine is associated with impaired mental functioning.59, 60  Furthermore, despite common lore, the authors of an extensive medical review on caffeine found no evidence that this drug helped to improve intellectual capacity.61  A summary of some of the effects of caffeine on the brain is listed in Figure 16: Caffeine Impairs the Brain Eight Ways.

It comes as no surprise that caffeine interferes with sleep.  Caffeine consumed within an hour of bedtime makes it harder to fall asleep, decreases the total amount of time slept, and significantly worsens sleep quality.62  Specifically, caffeine decreases the deepest, most restorative stages of sleep (stages 3 and 4).  Perhaps more surprising is that excessive amounts of caffeine can cause severe brain problems, including seizures.63  There are also descriptions of human fatalities due to caffeine.64

I would be negligent not to mention that caffeine has a host of effects that may indirectly affect frontal lobe function.  By inducing disease and both physical and psychological stress due to those conditions, the frontal lobe can suffer further under caffeine’s woeful rule.  Some of the other health consequences of caffeine use are listed in Figure 17: Other Potential Problems with Caffeine.65, 66, 67, 68, 69, 70, 71, 72

Although some of these effects are controversial (with some studies finding a caffeine link, but others not), we must ask ourselves if it is worth taking chances with caffeine when we have already discovered so many other problems with it.

Note:   This  above information is an excerpt from Dr. Neil Nedley’s, Proof Positive, in the Chapter: The Frontal Lobe: The Crown of the Brain.